This is a coffee table.  Like all things wood it started as a tree.  Although, if we’re more precise, it started off as a seed that fell off another tree, at some point became a tree, and finally ended up as this.  Or, it started out as multiple seeds, on multiple trees, because the parts of this table were 100% not coming from the same tree — more on that later.

The first thing was parts of this table were harvested from two other coffee tables, both of the same design, with wooden legs and stretchers, and a glass top.  I’m going to guess at some point the glass tops broke, which would explain why I found both of these on the curb waiting to be picked up as garbage.

New, they probably looked like this and are what I would call ‘tacky’.  Or, something out of the 1970s: 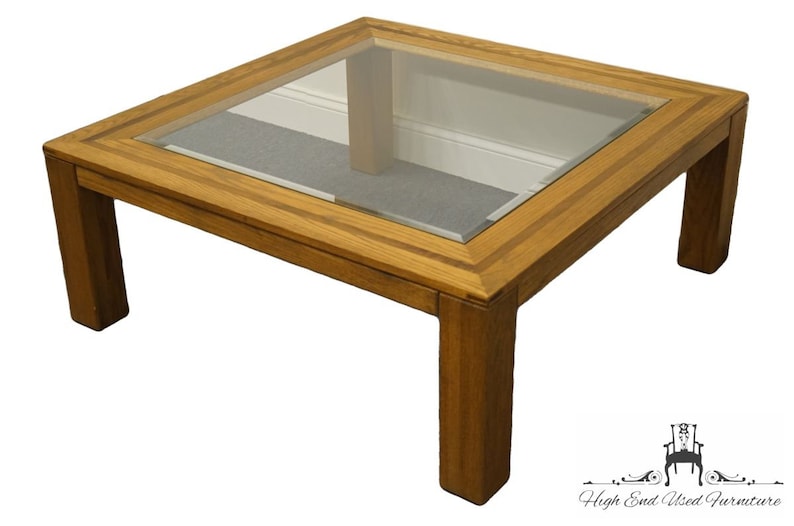 The second thing these started out as was as a pair of upholstered chairs from Pottery Barn.  These were also on the curb, suffering from broken legs that rendered them unsalvageable as chairs, even though this left enough useable legs for what I had in mind for them.  This is exactly what those chairs would look like new: 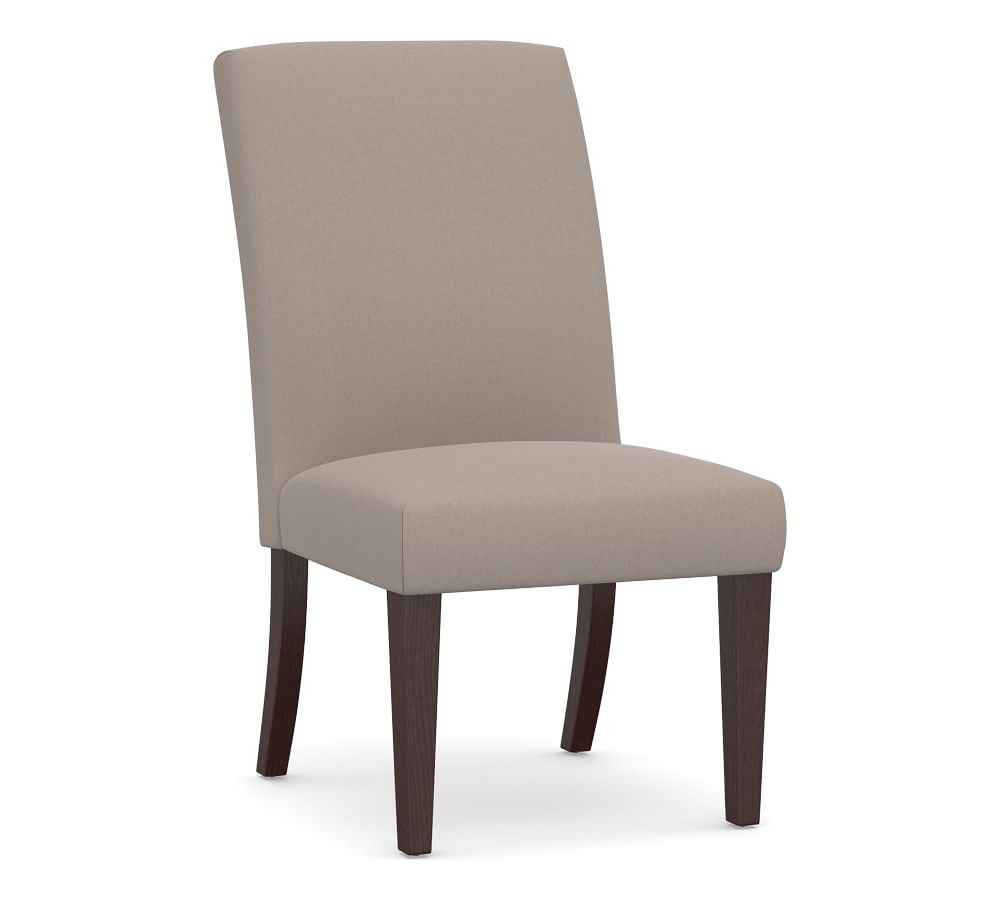 The last thing this table started out as was red oak hardwood flooring that had suffered water damage and so was salvaged out of the room they were in.  I found the flooring on Facebook marketplace at a decent price and so bought it out of the barn it had been stored in for who-knows-how-long.  I don’t need to show a picture of what solid hardwood flooring looks like, because you can probably picture it in your mind.

Either way, this table was a relatively easy, and fun, reclamation project that still posed it’s own unique challenges.

The apron/stretchers for this table were salvaged from the other coffee tables — they were the only things that had pieces long enough, and straight enough, to turn into aprons/stretchers for a regular-sized coffee table.  Unfortunately, because these pieces were not all that thick, and I knew I wanted something a little chunkier, I was left with gluing two pieces together to get my stretchers/aprons.

The effect of all this is I was not left with enough material for two stretchers each for the top and shelf, but had to make do with just a center stretcher for both top and shelf.  This was not something I worried about because of strength — trust me when I say the top and shelf are strong enough on their own they don’t need stretchers at all.  In fact, the stretchers of this table really are there just to hold the two ends of the table together, and parallel.

Rather, I worried about the look of the table — I’ve been trained by society/pop-culture to expect a certain look to furniture, with aprons/stretchers all around.  So doing something different worried me a touch.  Looking at it now, though, with the nearly-invisible center stretcher, I’m very happy with the minimalist vibes the table gives off.

While the two chairs did provide four legs that could be used without needing anything done to make them straight, or to give them that sexy taper I favor for legs, they did have a variety of dowel holes to be filled.  Some of these filled holes could be hidden by the way the table was constructed, but some could not be.  In the end, while it is a bit wierd where some of the dowel holes have been filled, I like the weird look it gives.  It’s a design element, even if I did not intend it.

While the wood flooring was in good shape, and the water damage it suffered was purely cosmetic, in order to get the flooring flat on both faces meant planing away a substantial amount of material — you might not know it, but wood flooring has ridges along the underside, likely to give it some flexibility and a better feeling underfoot, and those ridges needed to go.

Well, once the ridges are gone, the wood left over is a bit thin for a table top, or shelf, which means gluing two layers of the flooring, back-to-back, offset slightly from one another so that each layer bridges the glue joint of the layer behind it.  The upside is this gives the layers extra strength.  The downside is that, unlike when you install flooring, one piece at a time, and can rely on the pneumatic nailer or stapler to get a good fit of each piece up against the one next to it, the pieces here needed to be assembled all at once — at least each layer was done all at once, and then later glued to the other.

The challenge here is it’s a lot trickier forcing six pieces of flooring against one another at once than it is forcing just two together, and can also leave some stress on individual glue joints.  Still, even though a glue joint opened here and there, they were easy to fill with a slightly less viscous glue, and which did not harm the strength at all.  In the end, it looks like a rustic design choice.

The other challenge was in getting all the pieces to lay flat to one another, which required a lot of sanding/planing to bring it flat after the fact.  On the downside, I hate sanding things to get them flat to the same plane as each other.  On the upside, you get a great looking edge profile of the flooring, especially on the end-grain:

In the end, though, this is a good-looking coffee table, heavy and and solid, even if it does have a slightly rustic look to it from certain angles.  Because the legs and stretchers are made from two types of wood — one is oak, the other is not — the base had to be dyed a dark walnut to unify it.  But the contrast of the colors between the base and the top/shelf makes the whole thing look pretty good.

Perhaps the biggest challenge I threw onto myself over this was making it something that could be easily disassembled for shipping, or travel.  The top and shelf are held on with the expected table top connectors, while the stretchers holding the table together from end to end are held in place with barrel bolts.  If needed, it could be taken apart and flat-packed.

Now, I have no idea how much this table would cost to ship — it probably weighs somewhere in the neighborhood of sixty pounds — but it can be shipped.  If you want it, you can drop me a line.  I’m looking for $275.  You pay shipping.  If you think this is a rip-off, I humbly ask you to compare it to this vaguely similar piece from Pottery Barn and remember mine was not made in a factor like a widget, but was salvaged by me and turned into a literal one-of-a-kind piece. 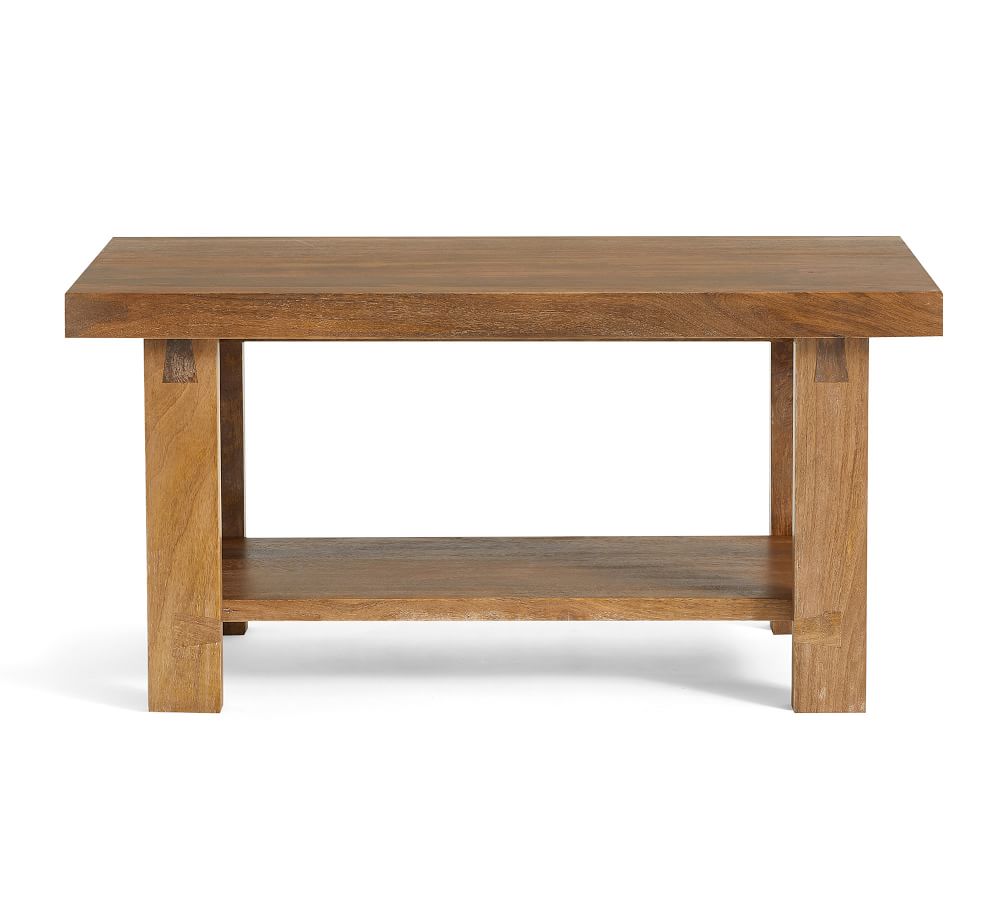 Mine (cat included for scale):