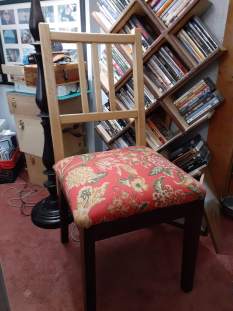 So, last year I built a chair.  You probably remember it – the chair I didn’t actually need and built on a whim just to give me some experience at building a chair.  As if I was magically going to switch careers and go into chair-making and needed the experience.

Anyway, I built that chair from a little more than one standard length 2×4 and a small piece of a plywood sheet.  When I built it last year this was actually a pretty cheap build for an experiment.  And, while the pine in a 2×4 is generally pretty lousy, it is fairly strong.  That said, if you’ve seen the cost of dimensional lumber lately, you know it would have cost a pretty penny if I went down the rabbit hole this year.

In the end, I don’t use the chair.  I find it a bit uncomfortable across the back because, instead of putting any sort of curvature on it side-to-side, it I made it flat – don’t know why I made it flat, other than it seemed easier that way.  But, because it’s flat it only seems to touch my back in one spot, which is directly on my spine.  I am not a fan of this and so aside from the initial sit in it, I don’t use it.

My wife, on the other hand, seems to love the chair.  She doesn’t complain about the back at all, and if she did she solved whatever her issue with it is by hanging a cheap Wal-Mart chair pad over the back.  It I knew then what I know now, I would’ve just upholstered and padded the back at home.  As it is, she uses a 2×4 chair with a cheap pad hanging over the back as her preferred, everyday chair as she works from home. 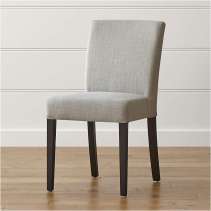 Obviously, since the title of this post is “Chair Build 1.5” you should have the idea that I did not completely build a new chair, but only built part of a chair – that being the .5 portion of the title.  In this case, I built the top half.  See, there was a trash day earlier this spring where some neighbor tossed out a single upholstered chair – you can see a similar example of it just above from Crate and Barrel.  Anyway, there wasn’t truly anything wrong with the chair other than the upholstery was extremely soiled, which I guess it enough these days to just throw out a chair that retails for $200+ dollars. 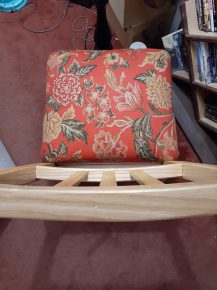 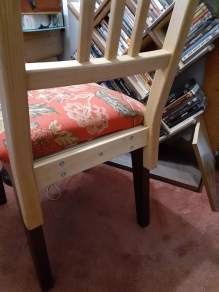 Well, because I was not interested in sewing up a new cover, but could easily replace the padding on the seat and reupholster that that, this left me needing a new back for the chair because I was not going to be able to upholster that – I’m adequate at best with upholstery.  Also, this seemed like the perfect opportunity to have another crack at what I find lacking in chair 1.0 – the flat back.  So, with offcuts of ash I had laying around, I launched into remaking the back, but with a side-to-side curve.  Because I don’t have a band saw, or a reliable jigsaw, it was a bit of a trick cutting the radius in the back.  Some of it was done on a table saw, which was not exactly safe, while the rest was done through a lot of sanding on the belt sander.

In the end, the back came out pretty nice, the only problem is I don’t think either my wife or I care for the chair.  It’s not the back that’s the problem this time – it’s the seat.  See, this is upholstered or springs that run front-to-back, which gives a little too much bounce for our liking and is why after a few days of trying it, the wife moved it to the living room, then under the dining room table, and ignores it.

Either way, the whole project gave me the chance to make the back of a chair the way I should have to begin with and now that I have a bad saw – I just need to get the right plug wired for it – I’ll probably get around to remaking chair 1.0 from scratch and adding the improvement from 1.5 sooner rather than later.

Hey – if you want to buy this single chair from me, drop me a line.  It doesn’t flat-pack but the back is removable for easier shipping.  I’m negotiable on price, but you pay for shipping.

Otherwise, go to my etsy store and buy something.