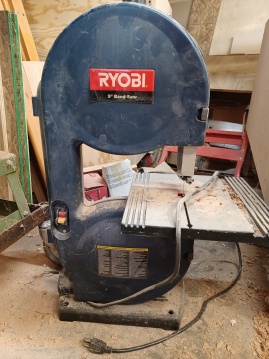 A couple years ago I bought a 9-inch Ryobi band saw off facebook marketplace.

I won’t tell you what I paid for it, but let’s just agree I paid too much for it.  This overpayment proved especially true when you consider the thing never properly worked, even after I replaced the tires and bought a new blade.  Even my son couldn’t even get it to work, and he’s the one with far more patience working through and calibrating the machinery than I am.  In the end, that bandsaw has basically sat unused since purchase, which means it’s spent two years being nothing more than an expensive paperweight.

Making matters worse, is even if this bandsaw did work, it only has limited use to most woodworkers anyway.  Being a 9-inch saw means it only has a cut height of about five inches, so it’s resawing capacity is limited.  More than that, the throat depth is only about six inches, which means you can’t cut much on wider pieces either.  It’s basically a saw for hobbyists, and nothing else.  Which means that, because I fancy myself as more than a hobbyist, and want good sawing capability in all ways, this bandsaw was useless to me.

So, instead of using it to resaw boards, I continued that task on the tablesaw, which is less-than-ideal owing to an underpowered saw motor, and also to the fact that, even with the thinnest blade possible there was too much material wasted when resawing on a table saw.

Of course, eventually, this all reached a head and so over the summer when I found an older bandsaw come up for auction online, I leapt at the chance to have it.

And what did I leap at?  Well, this little honey right here.

This is a Grizzly G1012 18inch bandsaw, and you can tell from its curves and styling it’s not one of the new ones Grizzly put out.  Apparently, at some point in the past, the idea of liking curves went out of style, and squares became the thing.  Either way, I don’t know what the age is, but given the thing weighs about a ton — only half-joking — it’s probably not new. 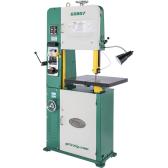 Anyway, at auction I paid around $400 for mine, which is actually pretty good for something as heavy as this piece of machinery.  The problem though is the motor on it was wired solely for 220.  And guess what power I don’t have in my garage?  You got it — 220.  Now, not having 220 is not the end of the world, and one solution would be to get it.  Except, my garage is old, and so is the wiring in my house, which means getting a 220 feed was going to be a major project.

With 220 not being an option, that left me with one choice: some sort of work around.

Now, if you’re online at all and watch youtube videos on woodworking, you’re probably familiar with Matthias Wandel in some way, who just loves designing, and building, shop tools.  He’s done sanders, jointers, and routers, but most-especially bandsaws.  But not metal bandsaws that he would machine and construct.  No, he likes making bandsaws out of wood.  (CLICK PHOTO FOR A LINK TO VIDEO).

Well, since wooden bandsaws do not come with a motor prebuilt, you have to get a motor and bring it to the party.  Mathias seems to prefer old treadmill motors, which is what got me thinking:.  If i can’t rewire the garage, why couldn’t I just change the bandsaw motor from one that’s 220 to one that’s 110?  Same horsepower and everything, just different motor?

The short answer is I could do that.  And I did.

After doing a bit of research I found a cheap 2HP motor on Amazon, and since I was buying a new motor, I sprung for a new cord and safety switch as well.  Aside from the difficulty of trying to get the motor off the bottom of the bandsaw, and the new one put on — which means you essentially have to prop the thing up at a precarious angle to get everything out from under — installing the cord, motor and switch were actually a breeze.  And since I forgot to put the pulley on the new motor first time I got it under there and bolted on, I got to do this step twice — turns out that after the motor is installed there’s no room to even get the pulley on the shaft, let alone fully seated without just taking the whole thing off again.

The good thing about the new and old motor is the bottom plates were identical so I did not need to drill any new holes or make other mods.  Even better — all the belts were in good shape and could be reused.  And so far the thing seems to cut pretty damn good, even on the rusty blades that came with it, so I got no complaints there.

If there was anything not in good shape with it, it was the fence.  Turns out the handle on it was broken, and didn’t like to slide on the rails even if the handle wasn’t broken.  Plus, the fence was so short it was almost not functions.  Which meant getting something aftermarket.  In this case I went with a Kreg fence that took my son a bit of time to install, but once I was on, it seems to work great. 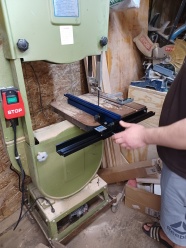 At the end of the day this baby wound up costing about $700 all told.  I maybe coulda saved some of that since the motor that came on the bandsaw purportedly can be rewired for 110, but I’m not mad  — I’ll probably wind up reusing it as a grinder.  If that project comes to pass, I  promise to share what I learn here.

And, even though the old 9-inch bandsaw is basically junk, I still think I’m going to harvest the motor from it as well.  I don’t know what I’ll use it for, but I hate the thought of paying what I did for it only to throw the whole thing away.